What is Coral bleaching and what causes it

Why Sea Turtles are Important for a Healthy Ocean

What is the PADI Open Water Course Koh Tao

Many of our scuba divers ask what Coral is and what is its purpose.

These are questions that all scuba divers should know the answer to, as it will help you better understand the marine ecosystems you spend so much of your time visiting.

This important knowledge provides you with a better understanding of the complex challenges our planet and humankind are facing in the 21st century.

By helping you to understand what Coral is, we hope to inspire you to become an ocean advocate and be a part of the solution for lasting change.

Is Coral an animal or a plant?

Corals are marine invertebrates that are part of the class of Anthozoa, in the animal phylum cnidaria, which also includes sea anemones and Jellyfish.

The individual animals are called polyps that tend to have a cylindrical body, with a mouth at the top, surrounded with tentacles used for defense and to clean debris away from the polyp or to catch small animals that drift past.

Although some polyps are solitary they tend to live in colonies, made up of many polyps.

Hard or stony Coral (scleractinians) species are important reef builders found in tropical oceans. The polyps secrete calcium carbonate at its base, and over time form a hard skeleton protecting multi polyp colonies.

Corals obtain most of the energy and nutrients they need to stay healthy from micro algae, as the tropical waters they live in tend to be nutrient poor.

The micro algae have a mutualistic symbiotic relationship with the Coral and are called endosymbiotic dinoflagellates, more commonly known as Zooxanthellae and they live in the tissues of the Coral.

This gives the Coral enough energy to continue to form and build their calcium carbonate skeletons.

This symbiosis also gives Corals their colour and as the Coral metabolizes, the waste produced is recycled as nutrients to the dinoflagellates.

Why are Coral reefs so important?

Described as the rainforests of the ocean, Coral Reefs are one of the most biodiverse ecosystems on the planet.

Thousands of species can be found on one reef and the oceans around South East Asia are the most biodiverse on the planet, teaming with thousands of fish and Coral species.

Apart from providing habitats and shelter for 25% of all marine species, Coral reefs assist in nitrogen and carbon fixing and provide the essential nutrients needed for healthy food chains.

They provide crucial protection for coastal settlements including areas such as mangrove forests and seagrass beds that are large nurseries for marine animals.

It is estimated the worlds Coral Reefs generate over $375billion annually with more than 500 million people worldwide dependent on Coral reefs for food and employment.

Coral Reefs have been described as the medicine chests of the 21st century, with new medical and drug research focusing on marine organisms.

Extracts from reef animals and plants have been used in the development of drugs to treat cancer, HIV, heart disease, arthritis, ulcers and much more.

What is Coral bleaching?

When the water temperature gets too warm the Corals will expel the micro algae living inside their tissues, which causes the Coral to turn white, hence the term ‘Coral bleaching’.

Now the Corals main source of energy has gone they become stressed, fragile and more susceptible to disease.

There are many variables that determine which species of Corals bleach and which ones have greater resistance.

Individual Corals differ in their responses to light and heat stress and as a result, so does the degree to which they bleach.

Climate change is the main cause of Coral bleaching.

Global warming means warmer oceans and Coral bleaching can occur when the water temperature rises by as little as 1°C, causing the Coral to force the algae out.

Can Coral recover from bleaching events?

If the increase in temperature is only for a short time surviving Corals can regrow their algae and if there are healthy Corals nearby, they can also help to repopulate the affected area.

However, if there is a major bleaching event, or additional impacts such as ocean acidification or pollution are present, then large areas of Corals may die and recovery may take many years.

Other factors that determine whether Corals recover after a bleaching event include differences in weather, ocean currents, proximity to upwellings of cooler water and any local human impacts and of course water temperatures.

Different recovery rates and individual tolerances have been noted in colonies of the same species and across different species.

Spatial patterns have also been shown to effect bleaching responses with the same species of Coral displaying contrasting reactions to bleaching events at different locations.

Ocean acidification, caused by greenhouse gas emissions and an increase in CO2 in the ocean also effects Coral bleaching, reducing the Corals ability to secrete calcium carbonate to build and repair its skeleton.

How have Coral reefs on Koh Tao been affected by Coral bleaching?

All had significant effects on the health, abundance and Coral cover of the Coral reefs around Koh Tao, especially the events of 1998 and 2010, the latter which lasted 5 months and caused unprecedented bleaching.

Large percentages of dead Coral were observed at some of the shallower bays around Koh Tao.

Generally, over the last 20 years the Corals around Koh Tao have seen periods of growth and development, then a bleaching event has left them stressed and struggling to recover.

In some cases, there will be signs of disease and susceptibility to predation.

After the 1998 Coral bleaching event it was recorded the reefs around Koh Tao lost approximately 17% of Coral coverage in just 5 years.

However, compared with other Coral reefs in Thailand, Coral recovery has been high around Koh Tao.

Data, obtained from reef surveys have shown Coral coverage to have further increased (2006-2014) noting that the reefs around Koh Tao boast some of the highest Coral coverage and biodiversity in the Gulf of Thailand.

One of the ways we can help monitor Coral bleaching events is to conduct Coral health surveys and as scuba divers on Koh Tao, we are in a unique position to contribute.

Black Turtle Dive conduct local Coral Watch surveys, which is a simple, non-invasive method for assessing Coral health and monitoring for Coral bleaching, developed by scientists at the University of Queensland.

This simple citizen science program helps people understand the plight of our Coral reefs, what Coral bleaching is and why it is happening.

Using the Coral Health Chart any snorkeler or scuba diver can monitor the health of any Coral reef, anywhere in the world.

Using the Coral Watch App or directly via the website, divers and snorkelers can upload their results to the database, which helps scientists monitor worldwide trends.

How can we solve the problem of Coral bleaching?

This isn’t an easy problem to solve. It requires an incredible amount of international cooperation and goodwill but the world must reduce its carbon footprint.

Climate change is the greatest challenge facing humankind and a huge threat to the Coral reef ecosystems that are so important in maintaining the delicate balance and health of the planet.

There are limits to the thermal tolerances the Corals that live on our reefs have. Even a small change in temperature leads to Coral bleaching and worse still, Coral death.

With carbon emissions increasing ocean acidity, the resistance of our Coral reefs is being severely tested.

Ultimately addressing climate change is the only long-term solution to protect our reefs from Coral bleaching.

How to reduce your Carbon Footprint

You can do your bit by walking, cycling or using public transport in order to reduce your carbon footprint.

Taking shorter showers, turning the tap off when brushing your teeth and fitting water efficient appliances to reduce electricity use at home, will all help lower your carbon footprint.

Avoid using pesticides and fertilizers on your garden, compost your food and reduce your plastic and other trash. Learn how to recycle more and stop using single use plastics completely.

Overfishing has devastating effects on Coral reefs and making informed choices on the fish and seafood you buy and eat, will help to keep our oceans healthy.

Reducing consumption of meat and switching to a more plant-based diet, will help to reduce the impact on the environment.

All these small individual efforts add up and make a difference, however, they are just one piece of the labyrinth of solutions needed to fight climate change and reverse the decline of our Coral reefs.

As humankind we need to get off our reliance on oil.

The lubricant of the world economy, oil is in pretty much everything we use from plastics to the clothes we wear and the detergents we clean with. It is also fundamental to the transportation of goods and people.

We need to change to environmentally friendly alternatives, such as plant derived plastics, wind and wave energy, solar power and electric cars.

Get Involved in Conservation projects

Become more engaged, join a conservation movement and vote for representatives that are committed to political action on climate change.

Our representatives need to be making decisions from the evidence provided through science-based research, helping to reduce emissions whilst transitioning to a low carbon economy.

Everyone of us can contribute to making our Oceans and world a better place, by changing our daily habits and by making more sustainable choices. 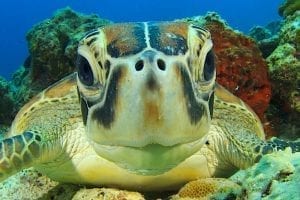 Why Sea Turtles are Important for a Healthy Ocean 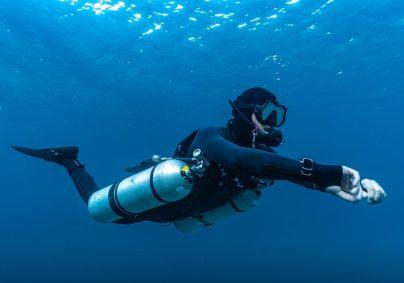 6 Reasons to become a Sidemount Diver

How to Reduce the Risk of COVID-19 Scuba Diving

Following our easy steps to reduce the risk of COVID-19 transmission when scuba diving is the sensible way to protect yo .....

How to get your Kids & Family into Scuba Diving

For a family with kids, Koh Tao offers dozens of dive sites and snorkeling locations to safely enjoy, with a range of ki .....

Scuba diving hand signals are a very important part of scuba diving and allow divers to communicate with each other thro .....

The Advanced Open Water course helps you to develop new skills to ensure your diving adventures are safer, fun and more .....